February - March, 2011 Venues throughout India, Bangladesh & Sri Lanka Combine one of the World's most prestigious sporting events with the amazing South Asian culture and the result is the 2011 Cricket World Cup. See the best 14 teams from all over the globe battle it out for more than 6 weeks in 3 different beautiful South Asian countries to be crowned the tenth ICC Cricket World Cup Champions. 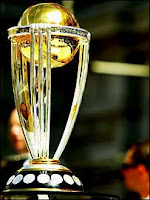 ICC Cricket World Cup 2011 Official Theme Song is composed by the Indian popular music trio of Shankar, Ehsaan, and Loy. The lyrics of the song have been written by Manoj Yadav. De Ghuma Ke will also be dubbed in Bengali and Sinhalese as India is co-hosting the event along with Bangladesh and Sri Lanka. The song has been marketed by Ogilvy and Mather.
The song is titled De Ghuma Ke which in itself is a passionate expression that creatively captures the fierce sense of competition and the desire to win. The song, according to the composers, avoids both the cliches of patriotism and run-of-the-mill Bollywood beats for a “fun and funky tune” with a “folksy feel and a hint of rustic Punjabi”. De Ghuma Ke is peppered with commonly used Hindi terms like, aare paare (this way or that), guthi gutham (fisticuffs), juta hausla badla faisla (buck up and change the game) and jiyo khiladi wah re wah re.

Posted by CHEthiya Nishantha at 10:14 PM No comments: